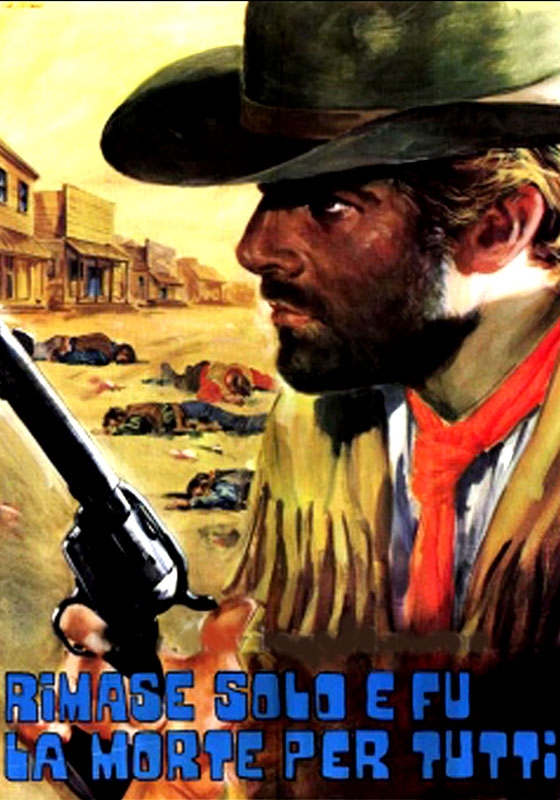 Dakota, a sheriff, is framed by an outlaw band and sentenced to life in jail. He breaks free with his brother’s help. At large, the two brothers eliminate the entire gang and, his innocence established, Dakota is reinstated as sheriff.

Director Edward Muller aka Edoardo Mulargia obviously looked at Sergio Leone’s Dollars trilogy and Once Upon a Time in the West. The stagecoach chase at the start of the movie takes up about ten minutes of outlaws riding in pursuit, the coach racing along the famous “white” road near Rome, built in antiquity by the Roman Empire. Lots of shooting, guys falling off of horses, wheels turning, horse’s hooves clattering in the dust. Later on some outlaws wait outside a bank for some money to come out; they check their guns, look tensely at each other, look at the bank, look at their hostages, check their guns again and the hero is captured and beaten while the bad guys laugh. They chortle, cackle, and guffaw with each blow that falls. This is a competent spaghetti western of interest to fans of the genre. Tony Kendall is good as the brooding sheriff Dakota, falsely sent to prison by (among others) Dean Stratford as a leather-clad gunman who doesn’t like him. Kudos to the stunt team who do a very good job of falling off of buildings, tumbling down cliffs and looking like they are really being hurt. 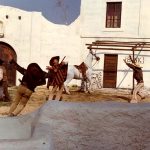 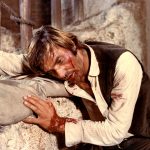 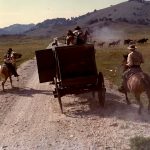